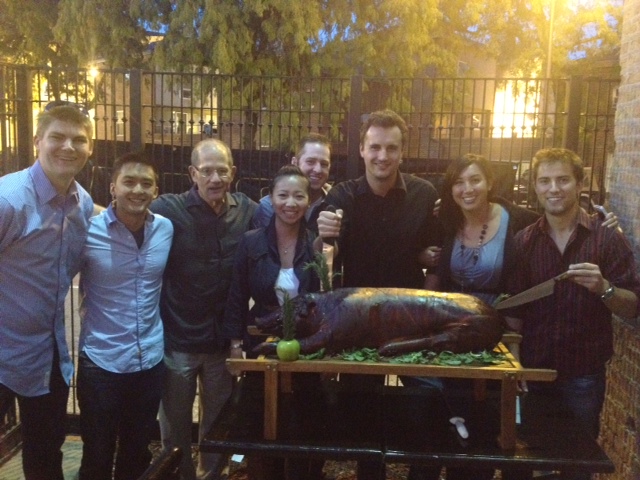 It is always great to travel around the country and meet our wonderful alumni as they get together to maintain their friendships. Recently, I was in Chicago and had the opportunity to attend a pig roast organized by Dr. Jason Primavera, Class of 2011, who is in his second year of Oral and Maxillofacial Surgery in Chicago, along with his fiancée, Frances Wang, who is also a graduate of the Class of 2011. We were joined by Dr. Stephanie Moniz, the fiancée of Dr. Ryan Colletta, who is in his second year of an Oral and Maxillofacial Surgery program. Both Frances and Stephanie are practicing general dentistry in Chicago. We were also joined by Dr. Kevin Robertson, who is in his first year of residency at Loyola in Oral and Maxillofacial Surgery; Dr. Alan Chee, who is in a GPR program; and Dr. Scott Sutter, who is attending the endo program in St. Louis.

It was a spectacular evening in Chicago. The weather was wonderful and the food was great, but seeing our alums enjoying each other and strengthening their ties of friendship was very impressive. Their feeling toward the dental school was positive and it certainly made me proud to see them continue to gather to reminisce and reconnect amid their busy professional and personal lives. May they long maintain their connections with each other — and with the school where those connections were forged.